Some say that every restaurant should have a good story line. The story behind the Mexican Society of Chinatown is that a group of Mexicans immigrated to Australia and moved into Adelaide’s Chinatown area. The result is Mexican food with Asian influences as reflected on their menu. All the dishes that end in 88 cents (8 being the lucky number in Asian culture) have Asian ingredients of some sort. Anybody that has been to Hispanic Mechanic will see some similarities with the menu offerings, but I’m told the preparation is different.

Everywhere you look, there are light shades of pink and blue. It’s like the westernised version of Mexican decor, but surprisingly, I think it works. Of course, the location is in a prime position within Chinatown and it’s corner position allows plenty of light to flow through. There are plenty of seats inside and out on the pavement area.

At the Mexican Society, there are 9 specialty cocktails to choose from. I had the Resposado Aloetini which has tequila resposado, vermouth, aloe vera juice and coconut water. For me, it was like several tequila shots in the one drink. The vermouth is a key ingredient in martinis and added bitterness to the drink.

My friend had the Blood Moon which was made from orange, cherry liqueur, rice wine, pink grapefruit juice and a sparkling spritz. This cocktail was sweeter than the previous one and was probably more to my liking.

As a complimentary starter, customers are given a plate of seasoned Prawn Crackers. The crackers are firmer than the typical variety and the seasoning just makes them less bland. These are incredibly addictive and would make a perfect snack when sitting in front of the television.

As an entree, we had the twice cooked Pork Belly with a sweet and spicy orange glaze, pickled cucumber and watermelon rind. The pork belly was tender and succulent, and each bite simply melted in your mouth. The little piece of orange on top adds that little bit of zest, which marries quite well with the pork. My only criticism of this dish was that the pork belly was too fatty.

The next entree was the Tostones topped with chipotle chicken, refried beans, smoked corn salsa and pico de galla. The shredded chicken was well seasoned and the beans were soft and delicate. The pico de galla was light and refreshing, and the crunchiness of the corn was well complimented by the tostones.

For my main, I had the Crispy Pork Ribs with sweet black vinegar glaze, mixed field greens, cilantro, watermelon, red onion and lemon vinaigrette. The ribs were slow cooked and then fried. The meat was well marinated and easily fell off the bone. The vinegar glaze had a subtle sweetness and in some respect, it was similar to eating sweet and sour pork ribs at a Chinese restaurant. The salad was light and refreshing, and similar to a salad that I once had at Madame Hanoi.

My friend had the Mister Lee and Jose which is a boneless chicken thigh seasoned with sesame and chillies on a carrot-orange puree, pickled red cabbage, spinach, cherry tomato and jamaica-habanero-honey salsa. The chicken was tender and succulent, and the thick brown sauce on top reminded me of a satay sauce. I was told there was a bit of kick to it, but I didn’t try enough to experience it.

After some impressive entrees and mains, we felt the desserts ruined the flow of the dishes. Not that they were bad or anything, just not very exciting. I had the Lemon-Rosemary Tart with meringue and candied citrus zest. The house made tart shell was a little too firm and required a bit of effort to break. The meringue was light and delicate, and the addition of citrus balanced out the sweetness of the dish. 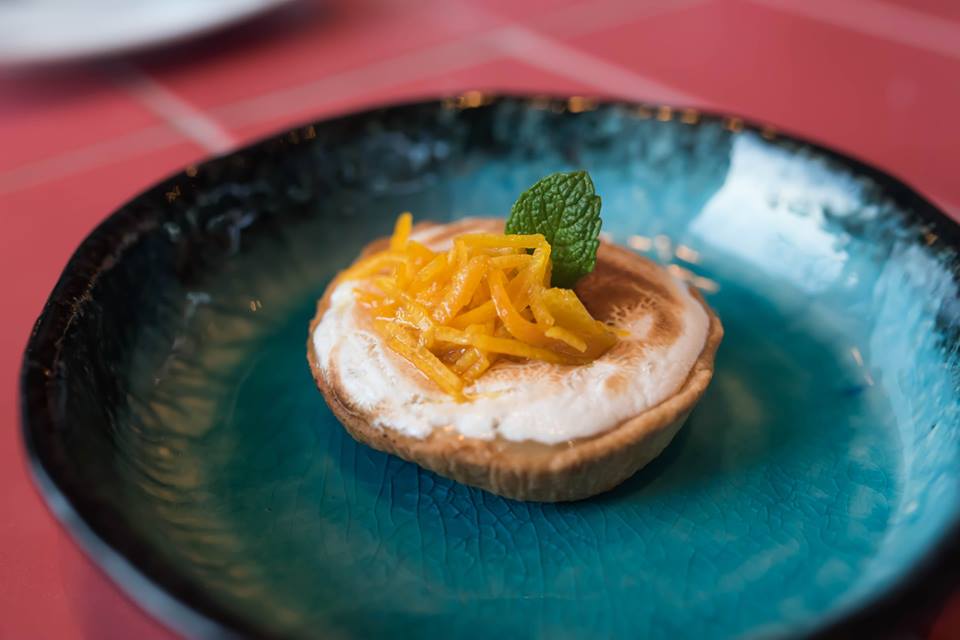 My friend had the Strawberry Sour Cream Mousse with Almonds. The mousse was very light and delicate, and reminded of a yoghurt I had not long ago. The fresh strawberries added a touch of sweetness while the almonds provided a crunchy texture.

For the first day of opening to the public, I thought they did very well. The staff were friendly and attentive, and the service was of a high standard. The atmosphere was relaxed, and even when the dinner crowd all moved in, I didn’t think it was too noisy. Pricing was reasonable and on par with what you’d pay elsewhere.

This place ticks a lot of boxes. The dishes we had were well executed, and their combination of Latin and Asian flavours are different enough to see them do well.