As far as wine dinners go, tonight was a special one. One of our hosts were international guests from Chef Outta Water, a social enterprise that specialises in cultural exchange programmes for chefs. Through local sponsorship opportunities, local chefs get to travel the world to experience cooking in other countries. Some of the dishes prepared tonight were from Chef Chris Holen who hails from Oregan, USA, and is also co-owner of Chef Outta Water. Sammy’s On The Marina, on the Marina Pier, also teamed up with The Lane Vineyard, to give us matching wines with a delicious six course degustation. 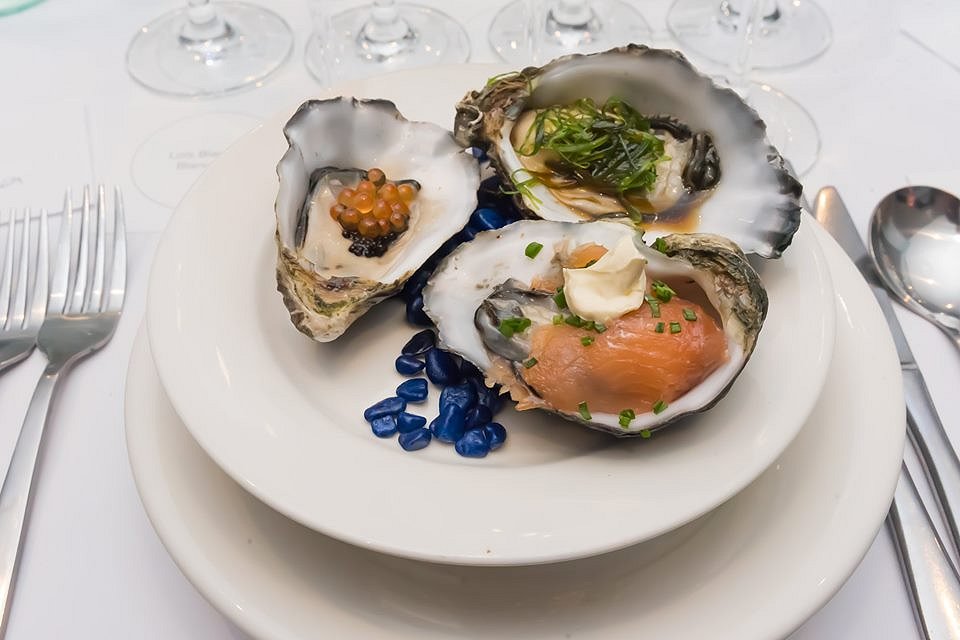 We started the night off with Assorted Coffin Bay Oysters. Served in a delicious trio, one had Smoked Salmon with sour cream, another was topped with Japanese Seaweed in a soy based dressing, while the last was a combination of Caviar and Salmon Roe. The latter two were salty in flavour, and worked well with the silky, smooth texture of the natural oysters. The Smoked Salmon and sour cream was a tried and true combination, however, the salmon overpowered any flavour from the oyster. The oysters were paired with The Lane Vineyard ‘Lois’ Blanc de Blancs and The Lane Vineyard ‘Lois’ Brut Rose. The acidity from the two drops really worked well with the oysters; the crunchy green apple, lemon and lime from the Blanc de Blancs, and the pink lady apple finish from the Brut Rose. 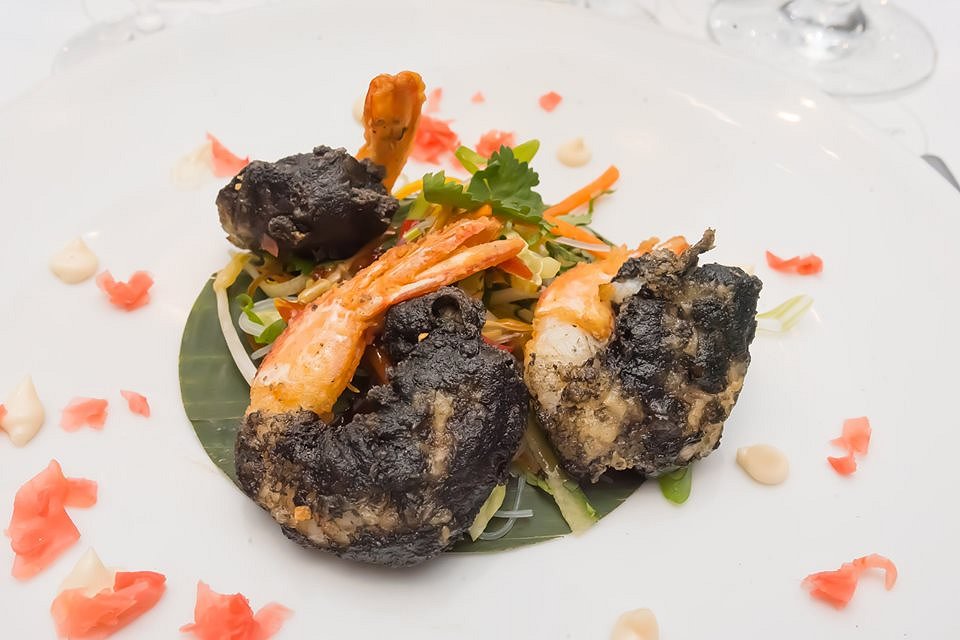 The Squid Ink Tempura Prawns with Wasabi Aioli was a hit amongst diners. The dark coloured prawns were light and crispy on the outside, and juicy and succulent in the centre. They sat on an Asian inspired salad consisting of carrot, bean sprout, cucumber, coriander and rice noodles. The salad was lightly dressed with a combination of sweet chilli sauce, honey and chilli. The dish was paired with The Lane Vineyard ‘Block 2’ Pinot Gris and The Lane Vineyard ‘Gathering’ Semillon Sauvignon. In line with the previous drops, the Pinot Gris had notes of honeydew melon and nashi pear, while the Semillon Sauvignon brought gooseberry and citrus zest on the palate.

Next was the Boston Bay Mussel Chowder with crusty pide bread. The soup was smooth, thick and creamy with small morsels of mussel thrown into the mix. Combined with the garlic flavoured pide bread, you could really taste the flavours of the ocean in this dish. The dish was paired with The Lane Vineyard ‘Block 1A’ Chardonnay which had aromas of peach, papaya and orange blossom, and nectarine, honeydew melon and tangerine on the palate. 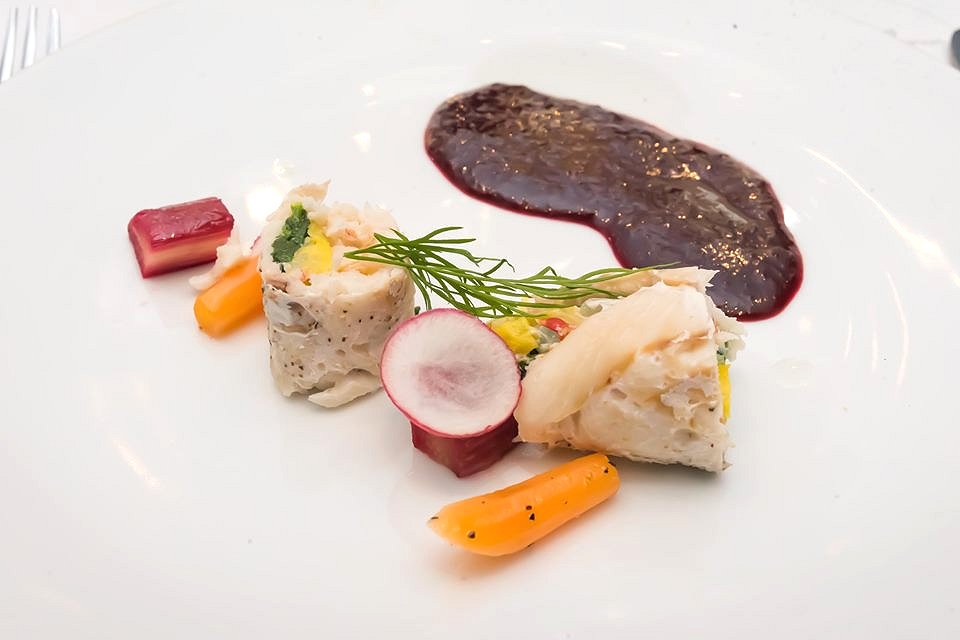 Beautifully presented was the Steamed Red Snapper with Lobster and Spinach and a berry coulis. Wrapped in the red snapper fillets were green spinach leaves and distinct morsels of lobster. Eaten by themselves, they were perhaps on the dry side, but when combined with the berry coulis or the pickled rhubarb, it was either too sweet or acidic. The dish was paired with The Lane Vineyard Pinot Noir which had cherry, rhubarb and dry herbs on the nose, and more of a plum taste in the mouth.

Next was the Pan-Seared Hapuku with wild chanterelle mushrooms, pumpkin puree, tarragon oil and reduce rose fish broth. This was simply an amazing dish! The fish fillet was juicy and succulent, with lovely crispy skin. The pumpkin puree was smooth and buttery, and complemented the fish well. The dish was paired with The Lane Vineyard ‘Block 8’ Merlot which had aromas of blueberry, mulberry and sweet spice. On the palate, the fruit and seafood matching continues with distinct flavours of plum, blackcurrant and raspberries. 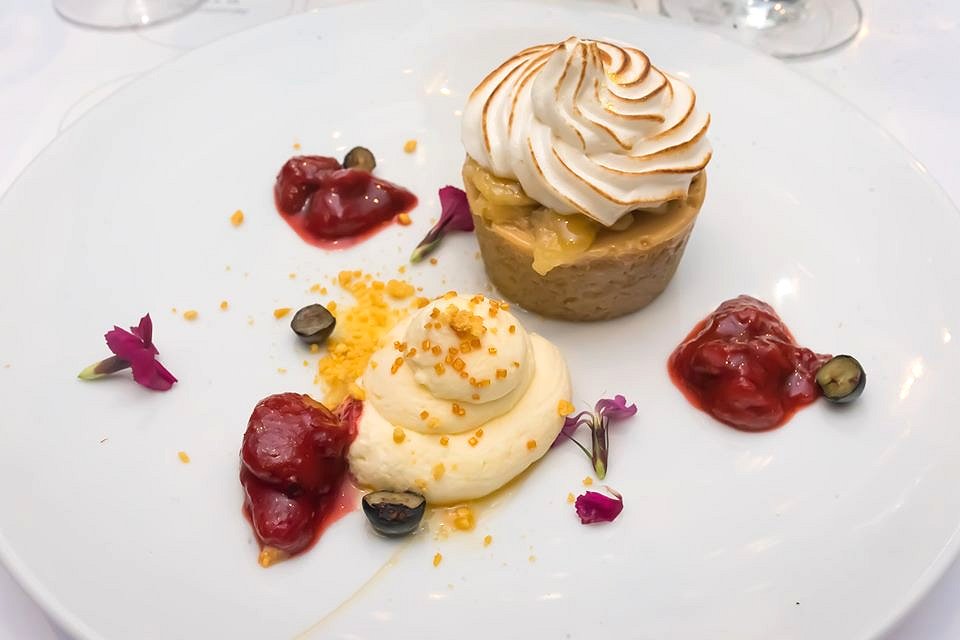 Last but not least was the dessert. The Banoffee Pie with oats and caramelised banana, strawberry compote, and honeycomb garnish was a great way to end the night. The layers of naturally sweet banana worked really well with the soft, delicate meringue. The pie base was firm and the texture of oats was evident with every bite. The dessert was paired with The Lane Vineyard ‘Block 14’ Basket Press Shiraz which has an intense aroma of fruit and pepper. On the palate, there was blackberries, forest fruits, cherry, liquorice and star anise, which complemented the dessert well.

Despite the stormy weather, it was a great night with lots of delicious food and wine. We had a another six amazing dishes with quality wines from The Lane Vineyard. Adelaide Food Central would like to thank Pervez Alam and all the staff at Sammy’s On The Marina for their kind hospitality, Simon Millcock and Chef Chris Holen from Chef Outta Water, and Turon White from The Lane Vineyard for all the matching wines.

With the success of the Sammy’s On The Marina wine dinners this year, the restaurant is evolving with new and exciting things to come. Make sure you follow them on Facebook and Instagram to get all the latest news.