Unley Road’s Gateaux 259 has been open for almost two years now and, with business for their bakery wholesales booming, Gateaux is now setting itself apart in the brunch world too!

Co-owners, James Donnelly and Stephanie Rijken have long held the belief that fresh and made-from-scratch is best when it comes to their food. Gateaux’s front-of-house dining area may just seem quaint in comparison to their huge on-site bakery where they bake all the bread and pastry used for their dine-in menu.

Well known for their croissants, all of Gateaux’s baked goods take inspiration from France (hence their name!).

“We use traditional French techniques but obviously with modernised flavours and also adapting those sort of products into the Australian community as well. There’s some things in France which are crazy, which we’d love to do here, but obviously the Adelaide market aren’t ready yet,” says James.

We paid Gateaux 259 a visit this week to try their new winter menu for ourselves and here’s what we thought:

Baked Eggs
This dish featured two eggs baked in a cute little ceramic bowl, with red kidney beans and a thick tomato based sauce. The sauce itself had a hint of sweetness, balanced well with the savoury notes and the two slices of baguette were perfectly toasted and buttered, ready for dipping!

Banana Bread
How can any Aussie café go without serving banana bread?! Well, we’ve never had banana bread so good as we could definitely taste that the two slices were made fresh. The dish came out still warm with the edges slightly golden and crunchy. The caramelised banana pieces served on top added an extra layer of freshness and the peanut butter ganache and honey onglaze added the final touches to the perfect banana bread.

Hash Brown
This dish took us by surprise with the presentation absolutely blowing us away! The stack of hash brown not only looked delicious but was perfectly seasoned and satisfyingly crunchy on the outside and fluffy on the inside. The yolk from the poached egg served on top of the hash brown tower and the tangy beetroot relish complemented the texture of the hash brown itself. According to James, this dish outsells all the others ten to one and, now that we’ve tasted it, we can definitely see why! 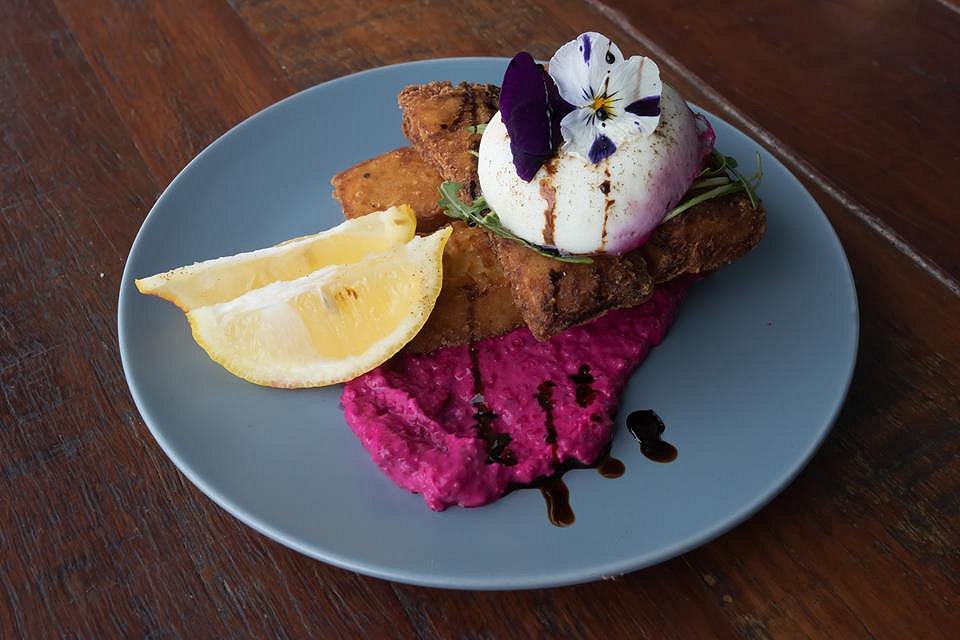 Beetroot & Haloumi Brioche
Another little surprise, this dish came out looking a bit like a large slider, with the zucchini fritter, fried haloumi and egg exposed and the beetroot relish smeared beautifully on the plate. The zucchini fritter was savoury and unexpectedly creamy on the inside, with a crunchy outer layer. The vegetables used in the fritter were from the fresh food market and we can vouch that it certainly made a difference!

Bacon & Maple Waffle
This was the first time we’ve tried a savoury waffle and it was definitely an interesting flavour profile to say the least! The Belgian waffles were crunchy on the outside and soft on the inside and, being not too sweet, complemented the bacon quite well. The saltiness of the bacon created an overall vibe that this was a savoury dish, but the Canadian maple syrup and peanut butter ganache added yet another dimension to the myriad of flavours.

Berries & Yoghurt Waffle
More of a traditional waffle, this version consisted of fresh mixed berries and a dollop of Greek yoghurt. The strawberries that decorated the edge of the plate seemed to have been stewed, enriching the sour notes of the fruit and adding a softer texture to the dish. 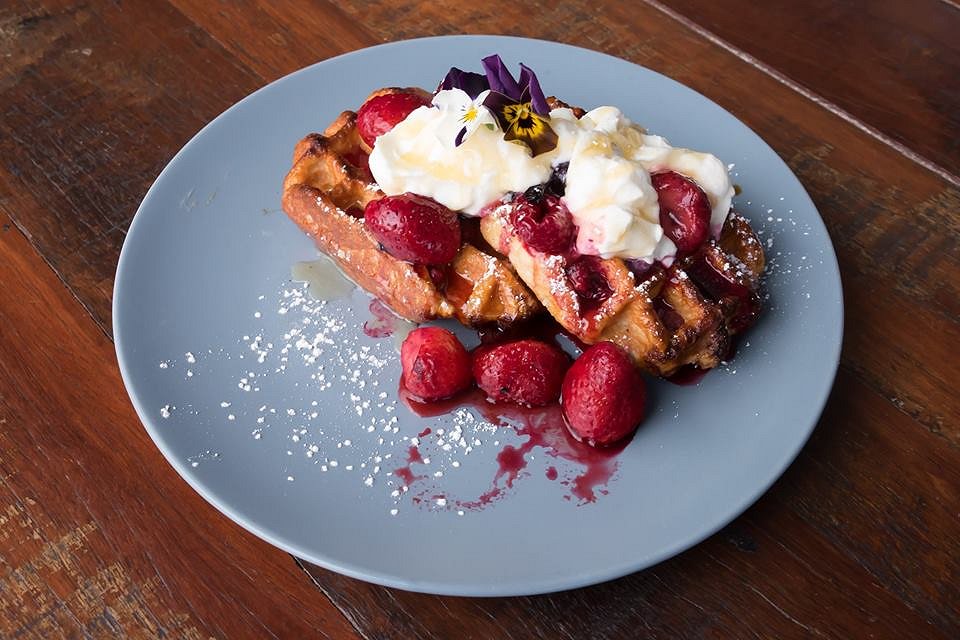 Almond Crème and Pear Bruschetta
This dish was probably the simplest of the bunch but offered a great way to snack on something slightly sweet (but not too indulgent) along with a cuppa. The almond crème and pear slices were paired with a pomegranate dressing and topped with aromatic toasted almonds, all served on top of Gateaux’s house-made baguette.

Having tasted most of Gateaux’s new menu, we can definitely say there was a consistency across all dishes, with the textures, flavours and even colours of the menu creating a sense of synergy that’s hard to replicate. With the winter menu sticking around until November, there’s plenty of time to pop in and try it for yourself before they switch it up once again.

“We’re going to gradually more ‘French-it-up’ but obviously at the pace that the Australian community can take,” says James.

Gateaux 259 is open Monday to Saturday 7am til 3pm with their breakfast menu offered til 11am.