I have lived a mostly plant-based lifestyle for the past 7+ years. While I’m not 100% vegan in the traditional sense, I do choose animal free eats or products the majority of the time. So, believe me when I say, it is not easy to find a totally vegan and easily accessible breakfast sandwich. For awhile, it was like the holy grail of vegan food items for me and my plant-based pals!

This is why I’d like to initiate a much deserved slow clap for Lord Of The Fries. They have created an all vegan, super delicious, and mega convenient breakfast menu that could rival any McMeal. I even brought over one of my meat loving and super picky friends to try them along with me, as I am biased toward most vegan food. She has an incredibly critical palate, however, with Lord Of The Fries she was won over. She even loved the plant-based egg option as much as I did! But, before I get ahead of myself, let’s break down and review each sandwich so I can highlight why Lord Of The Fries deserves a proverbial gold star.

Let’s talk about this “egg”. I’m seriously impressed with the texture they’ve achieved in their plant-based creation. The yolk especially has a great mouth feel and a similar creamy flavour to that of a traditional egg, and the whites had me doing the edible equivalent of a double take, as I was unsure at first they hadn’t mistakenly put the real deal in there. Overall, the meaty sausage patty paired with melted yellow cheese, creamy mayo, zingy mustard, their imposter egg and a perfectly toasted english muffin is a vegan hangover dream! 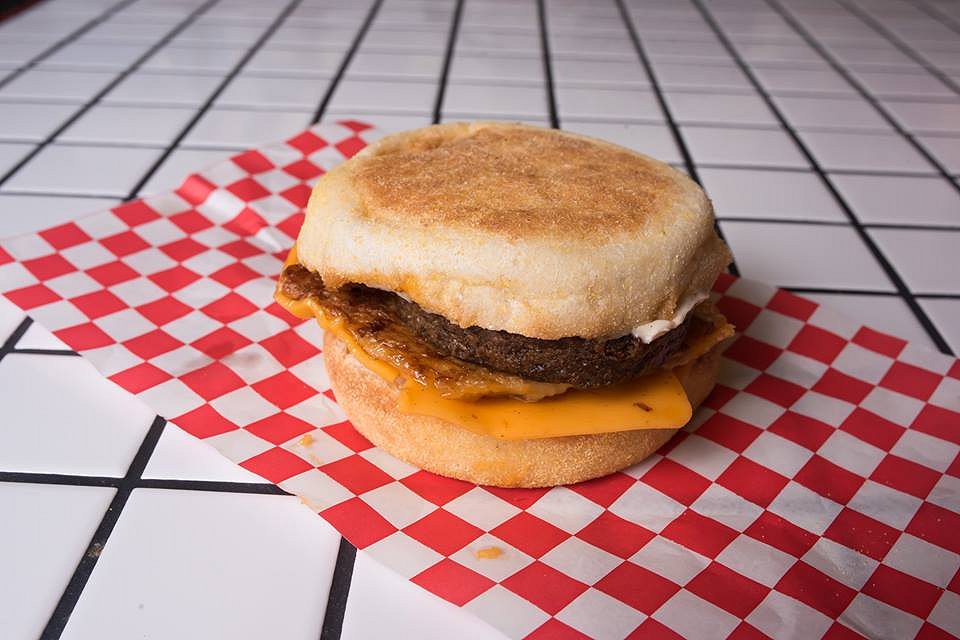 If you’re not into a sausage patty with your breakfast sandwich, worry not, the Egg & Bacon has your back. With the same impressive imposter egg, creamy mayo, tangy mustard and toasty english muffin, but with plant-based bacon instead of a meaty sausage patty. I do wish they had cooked the bacon a little longer, as the smoky undertones would have been highlighted better with a little crisp on their bacon, however, overall it’s a solid sandwich.

A classic breakfast option for anyone wanting a little fresh tomato and lettuce action with their breakfast! The tomato adds a bright flavour to the rich plant-based bacon and creamy vegan mayo. I had the same desire for a crispy edge to the bacon in order to add a little more smokiness. This being said, I would recommend this option if you’re looking for a lighter breakfast to start your day.

I love hash browns, so I was stoked for this one. It didn’t disappoint! It’s definitely for someone who’s hungry, with a lot of fatty fried potato and meaty sausage patty all in one bite. The BBQ sauce and caramelized onion gave a mild sweetness which balanced the umami qualities. This is also the sandwich which revealed how much my omnivore friend loved the imposter egg, as her only constructive feedback was “I wish it had that plant-based egg.” Although I was happy with this sandwich as is, I did a little internal dance that a non-vegan was as into these options as I was!

This sandwich was probably my overall fave! The English muffin was crispy on the outside and fluffy on the inside, with a good kick from the jalapeños to help wake you up in the morning. The indulgent spicy mayo did overpower any flavour from the salsa, but I wasn’t mad about it because I adore a good vegan mayo and I love spice! All topped off with that killer plant-based egg; I can’t wait to have this one again!

There is finally a vegan chicken and waffles, can I get an amen?! The fried chicken gave a familiar meaty texture and was cooked with a perfect crisp on the outside. Wrapped in a golden and perfectly buttered waffle with a slice of their plant-based bacon, drizzled with a touch of maple syrup sweetness. My note wishing the bacon had a little crispy edge to it still rings true here, but overall I was in vegan junk food heaven! All I can say is thank you, Lord Of The Fries. Thank you.

All of Lord Of The Fries plant-based alternatives are created specially for their menu, helping them lead the way in innovative vegan options. Adelaide’s Hindley Street location was the first full service vegan LOTF, staying dedicated to being completely plant-based from the day they opened!

You can now get all 6 breakfast sandwiches at both their Hindley Street and Jetty Road restaurants. And the best part? They offer their breakfast menu all day.

So whether you’re craving a little breakfast for dinner or you’re hustling to an early morning meeting, you can now get a delicious and all vegan breakfast sandwich at two convenient locations in Adelaide