Hains & Co is a mere walk down the beaten track from the small bar mecca of Peel Street. Tucked away down the mysterious alley of Gilbert Place, lies the hidden treasure trove. Following a nautical theme, Hains & Co has been serving up the good stuff since 2015 from their vast selection of global potions, and Mr Black is no exception.

Mr Black is a unique bitter blend of high quality Arabica coffee, sourced from top growing regions, combined with pure unaged wheat spirit. With each bottle of the caffeinated concoction made by hand in one of Australia’s coffee epicentres, Sydney, you can taste the passion transcending from the distillery and roastery in every drop of Mr Black.

As Martin Hudak crafted a number of cocktails from behind the Hains & Co bar, he gave us some insight into why he believes Mr Black is the ultimate coffee liqueur. “It has half the amount of sugar and ten times more coffee than any other commercial coffee liqueur”, he told us. Now that explains the bold, complex and balanced composure of the intoxicant. 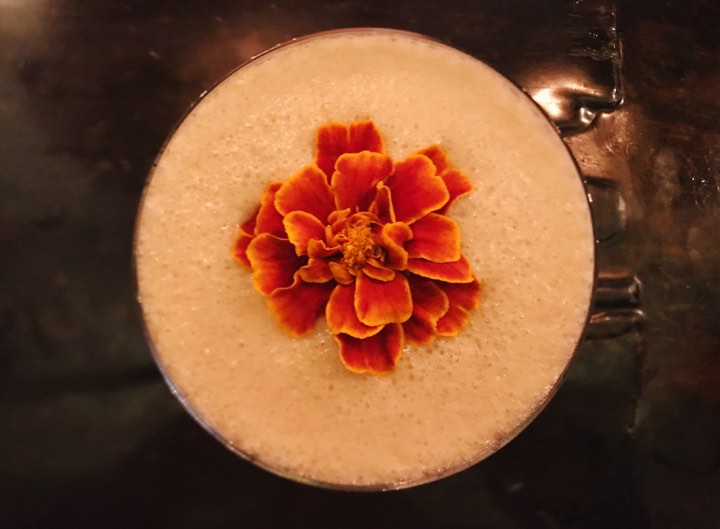 Upon tasting the Espresso Martiki from Mr Black’s Eyes Open menu, I can tell you it ain’t your ordinary Esp-Mart. Utilising Mr Black, spiced rum, orgeat, pineapple and espresso, topped with a delightful edible flower – it is daring, yet pleasantly pungent. With tropical notes from the pineapple, sweetness from the almond (orgeat), and obvious hits of that audacious Mr Black liqueur, the Espresso Martiki is the perfect blend of ‘I could be on a summery island right now’, and a heart warming ‘but also at my favourite small bar in the big smoke’. Delicious.

Following the discovery that the Espresso Martiki was my favourite cocktail from the Eyes Open menu, Martin also confirmed his fondness for the luscious drink. “It is a simple twist on a classic. I love how easy it is to make where ever I am around the world, and also how easy it is to drink two or three of them”, he exclaimed.

If you’re not an Esp-Mart fan, then the polar opposite on the Eyes Open menu should do the trick – the Oaxacan Breakfast. This potent brew is like a slap in the face after a lengthy day on the job, or a ‘get up you’re going to be late for work’ alarm…in the best way possible though. This spirit(ual) hybrid contains Mr Black, Mr Black Amaro, Mezcal, and orange bitters. I for one am not a connoisseur when it comes to super strong/hearty drinks, so I heed the favourable opinion from Hains & Co bartender, Aaron Formosa, to truly do the beverage justice.

“The combination of smokey mezcal, coffee and orange peel takes me back to the morning after a bonfire. The remnants of smoke in the air as I sip my morning coffee, my dad drinking orange juice, and mum trying to clean up. That’s what this drink does for me, it takes me home – and that’s what all great drinks should do. They should evoke emotion and create a connection with the drinker.”

If that doesn’t get you going for a Oaxacan Breakfast, I’m not too sure what will.

After the successful launch of Mr Black in California and South East Asia, Martin will be spending time in Europe showcasing the small craft company’s sensational liqueur. However, in the meantime you can catch Martin at his bar, Maybe Sammy, in Sydney for a coffee cocktail. Or pop down to ship-like Hains & Co at 23 Gilbert Place in Adelaide and visit the crew for some Mr Black cold brew coffee liqueur.

Words and Photos by Dale Anninos-Carter