The Parade’s SAHA has only been open for nine months but its light, bright interior and beach house vibes has already helped this Lebanese café make a name for itself.

Owner, Abdoullah Mehio, and with his whole family are involved in the business, with interior design, menu creation, as well as serving both front-of-house and back-of-house. With a playground in the courtyard and a chalk wall that kids can freely draw on, Abdoullah really places emphasis on welcoming families to SAHA.

“We’ve got three young ones ourselves, three kids under five, so we know how hard it is to go somewhere and firstly have a decent meal and also have somewhere for the kids to just hang out and not have to worry about them. We get so much good feedback about the fact that we can accommodate that and we try to make it easier on parents too.”

Having renovated recently, SAHA is now able to host group bookings and functions and even yoga and pilates classes.

We decided to pay another visit to try some more of their extensive menu offerings and here’s what we thought:

Mixed Dips
Made of a trio of housemade hommus, baba ghanoush, and labneh, this dish is perfect to get your appetite ready for Lebanese cuisine. Each dip offered something different, with the hommus adding a gritty texture, baba ghanoush a smoky eggplant aftertaste, and the lahneh a freshness, all topped with a bit of lemon juice. The Lebanese bread and picked veggies served alongside provided an extra level of flavour. 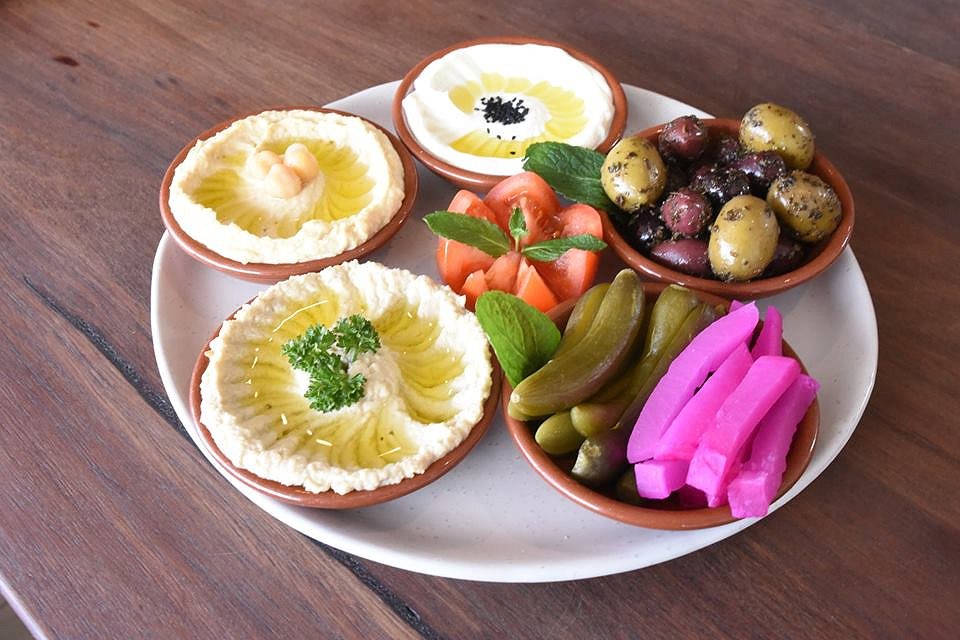 Falafels
Used in many other SAHA dishes, the falafels are a classic Lebanese treat. These ones were the perfect consistency (not too crumbly) and were perfectly seasoned. Made from fava beans, chickpeas, dried coriander, garlic, and cumin, this was also incredibly aromatic. The side of tahini sauce gave a cool, refreshing touch and also complemented the drier falafels.

Breakfast Manoushi
Similar to the last manoushi, this one was filled with free range egg, sujuk, capsicum, salsa, spinach, and cheese and definitely is a good choice for breakfast. All the flavours complemented each other well and weren’t too out there for those who like to play it safe with their food. The saucy sujuk was well-balanced with the texture of the egg and the melted cheese and the spinach leaves added that bit of greenery.

Ful Mudammas
With warm, slow-cooked fava beans, served with chopped tomato, seasoned with fresh lemon juice, garlic, olive oil, and garnished with parsley, this dish was a nice, filling side-dish. Served with Lebanese flatbread and pickled veggies, there was also a myriad of flavours to play with.

Sweet Potato Fries
You can never go wrong with sweet potato fries, right? SAHA’s Sweet Potato Fries are next level. Incredibly generous and crunchy on the outside, they were also very well-seasoned – no complaints from us!

Fatteh
This dish caught us by surprise, with its exterior looking a bit like a porridge. However, when we dug around the bowl, we discovered more than just the thick layer of yoghurt on top. Underneath was slow cooked chickpeas mixed with bits of Lebanese flatbread (and interesting, but very welcome addition) and a cinnamon garnish topped the dish off, turning it into a little bit of a sweet dish. We liked this dish more than we thought we would!

With more Lebanese joints popping up around Adelaide, SAHA sets itself apart through its friendly service, incredibly fast food-preparation, gorgeous interior, and, of course, delicious selection of food.

“We make all of this stuff in house from scratch. We take pride in the freshness of the produce and it’s all locally sourced. It’s home-style food in a commercial environment. People say it’s delicious and that’s all we can ask for, really,” says Abdoullah.

SAHA is located on The Parade, Norwood and is open Tuesdays to Sundays from 7:30am til 3:30pm for breakfast and lunch.

WHERE: 303 The Parade, Beulah Park