Anybody that is familiar with the Adelaide restaurant scene would know who Nu Suandokmai is. He’s been the chef at Nu Thai, Golden Boy, Gin Long Canteen and Mrs Q, only to name a few, and most people who have tried his cooking would agree that he has talent. Now he’s gone back to his roots and opened up his own restaurant, Lantern by Nu, which specialises in Thai street food. The restaurant itself has a rustic, industrial feel and physically seats 103 people. It’s located on a side street and away from the hustle and bustle of the Chinatown precinct.

Tonight, we started off with Betel Leaves with crispy pork belly and son in law quail egg. I think this entree was designed to be eaten with your hands, but because of the generous amount of filling, it was easier with a knife and fork. The pork was nice and crispy, as was the quail egg. The savoury dressing was well balanced and tied all the ingredients together well.

The Pacific Oysters with nam jim sauce were amazing. Just the right amount of dressing was applied without overpowering the flavours of the ocean you get with fresh oysters. I could eat dozens of these quite easily.

I am a big fan of all things chicken wings, so I was glad to see the Crispy Chicken Winglets. It should be emphasised that a winglet is half a wingette (the middle portion of a chicken wing) and we got 6 winglets in our serve. I’ve had winglets elsewhere before and one of the main benefits is the ease in which you can eat them. The downside is you don’t get much meat. Having said all that, the wings were crispy, and the meat, juicy and succulent. I just wished there were more.

Hiding under the bed of salad were the Thai Fish Cakes. The fish cakes were well seasoned, and as expected their texture was chewy. The dish comes with the dressing already applied which is consistent with all of their dishes, however in this case, I felt too much of the dressing was absorbed by the fish cakes making it a tad salty.

The Barbecue Pork Balls were soaked in a tamarind chilli sauce. Visually they looked like fish balls you would find in a Chinese noodle dish with broth. Their texture was firm and chewy, with the chilli sauce giving the dish much depth.

The last of the entrees was the 5 Spice Salt & Pepper Squid. This was hands down the best Salt and Pepper Squid I’ve ever had. The coating on the squid was light and crispy, and the squid itself was melt in your mouth. Simply amazing. 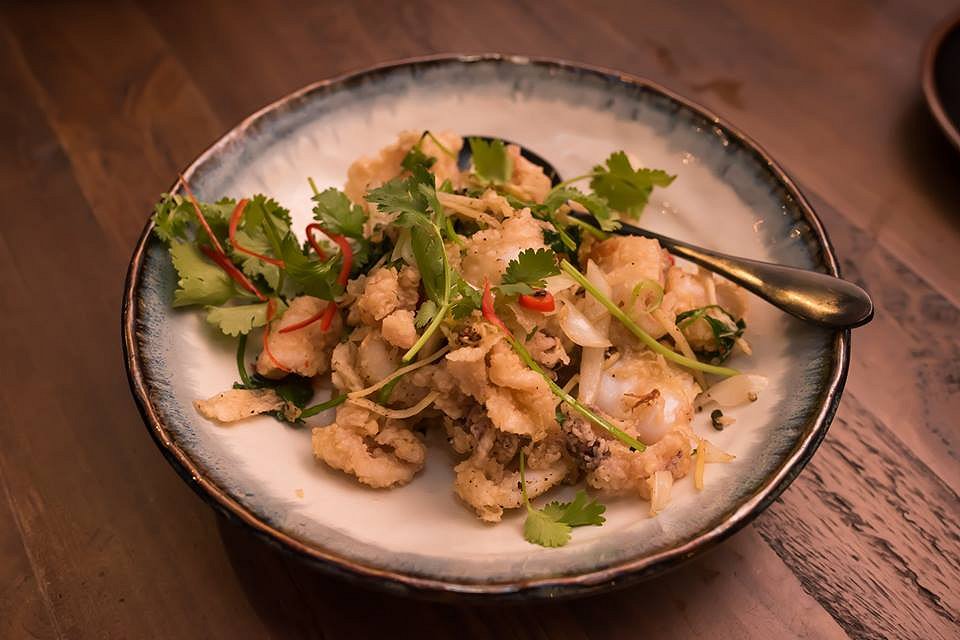 The first of the mains was the Slow Cooked Beef Cheek. Anything with beef cheek as an ingredient is always a good thing, and when it’s used in a Massaman style curry, be prepared to be blown away. The meat was slow cooked and simply fell apart. The flavours were so well infused, each bite was heavenly. I’ve had a similar high quality dish at another Thai restaurant in the past, but this was just as good, if not better. I would have been happy to order this dish and nothing else. 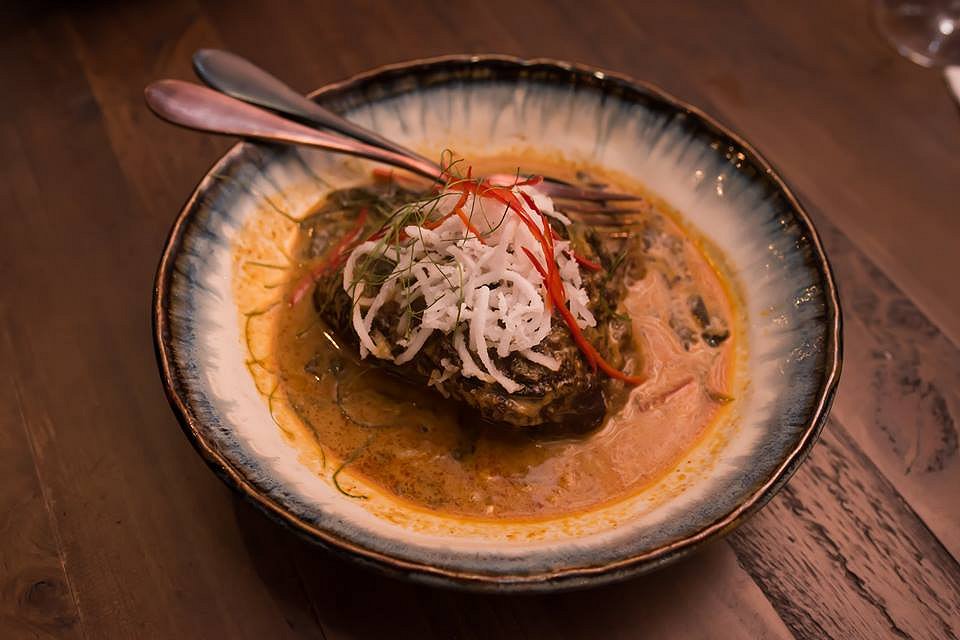 The Crispy Pork Belly with Asian broccoli is almost typical of a dish Mum would make at home with left over roast pork. It’s very rustic and would appeal to most. In this case, the pork is very crispy and the Asian broccoli is cooked to perfection. It’s all smothered in a well seasoned sauce that is worthy of licking the plate clean for.

The last of the mains was the Whole Barramundi with green mango salad. This dish was highly recommended even before dining here and it did not disappoint. The fish was prepared in a way that it could be easily cut into two fish fillets. The flesh was perfectly cooked, and the exterior still maintained its crunchiness. This was further complemented by the crunchy mango salad which had just the right amount of dressing applied. Hands down the best Barramundi dish I’ve ever had.

Even after 9 courses, there’s still a bit of room for dessert. The first one was the Chocolate Mousse with tropical fruits. The mousse was light and creamy without being too sweet. Inside the mousse were choc chips which added a nice crunchy component. The dessert was complimented by the natural sweetness coming from the medley of Asian fruits. It’s an east meets west dessert that works.

The second dessert was the Coconut Creme Brulee. The caramelisation on the custard was perfect; not too thick and cracked easily with a firm tap of the spoon. The custard was smooth and creamy, and you could taste the hint of coconut in the mix. As a personal preference, I thought the custard needed more gelatin to make it a bit thicker. The dessert was paired with coconut ice cream which provided good balance between hot and cold.

Each and every dish was so good! The service was great from start to finish, and we could hardly think of anything to fault. There’s still a lot to try so it looks like we’ll have to visit a few more times to go through the entire menu.