Tucked between an orchid, and a winery amongst the rolling hills, I had the absolute pleasure of visiting The Currant Shed; and I can’t wait to share my experiences with you all! With bluesy and jazzy tunes playing in the background, The Currant Shed oozed relaxed yet sophisticated vibes. The restaurant’s cosy but chic décor was uniquely Australian – with handmade glasses, utensils, and furniture. Six different types of timber were used all around the room; from the Jam factory tables to the locally made wooden spoons. But that’s not what you are here to hear about, so let’s talk food and wine… 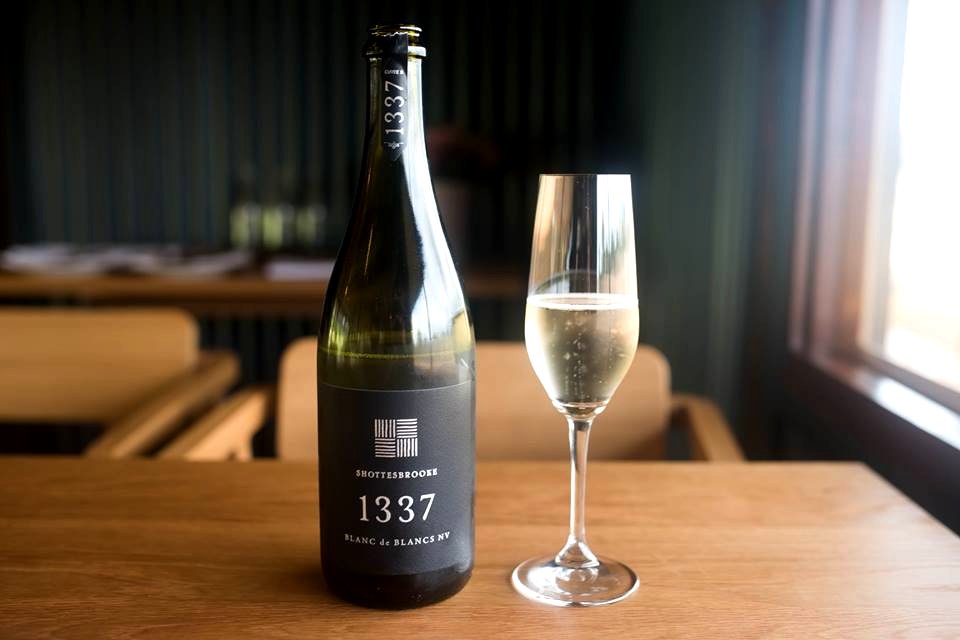 Upon arriving, we were first offered a glass of bubbly each – Shottesbrooke Blanc de Blancs NV. Shottesbrooke is the winery paired with The Currant Shed, and could be seen from outside the restaurants window to one side. It was a great way to kick off the meal – complex but fresh. Its slightly acidic flavour balanced nicely with the sweet, almost buttery-like aftertaste that comes from using 100% chardonnay.

We were then presented with three “pre-meal snacks” that are given to all guests before their meals arrive. First off were Oysters with red elk and citrus. I was immediately struck by the beautiful presentation of the dish and attention to detail. The oysters were fresh – just in season from Coffin Bay. The citrus component was a Thai style dressing consisting of lime, chili and soy pearls. The use of red elk provided a strong zesty tang, which cut through the ocean flavours.

Next, we moved on to a Brussel Sprout dish served with Emme goat’s cheese. The Brussel sprouts were from the restaurant’s own garden – and it really showed! You could tell instantly how fresh they were when biting into them – their texture firm and moist. A richer component was added to the dish through the use of beef fat in cooking the sprouts. It was all beautifully topped off by the creamy tanginess of the goat’s cheese.

The third and final of our snacks was Paris Creek Camembert Foam served with sweet potato crisps (playfully referred to as “chips and dip”). I loved the creativity in the dish. The foam really captured the essence of the camembert’s creamy but sharp and complex flavour, while maintaining a consistency light as air. I really didn’t think it was possible to do so! The chips were curled, thin and crisp. Coated with an oily and salty texture, their heavier consistency complemented the foam perfectly without being overbearing.

After being spoilt with such delicious and creative snacks, we were told it was time to begin our entrées. Our first entrée was Eastern Grey Kangaroo with wilted spinach, hazelnuts, and a blackberry reduction. The kangaroo was tender; perfectly cooked. A dusty texture was given with a light coating of native pepper and other spices, creating an earthy, cumin taste. It sat perfectly with the sweet but tart blackberry reduction. Underneath the meat, the wilted spinach was zesty and moist. The combination of watercress and hazelnuts energised the dish – adding a fresh and crunchy component to the dish. 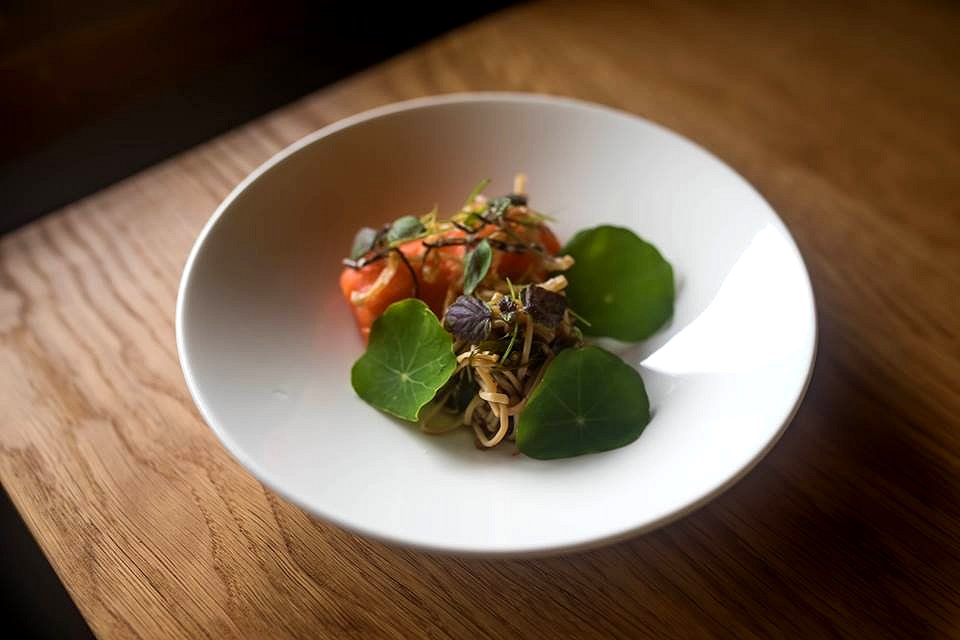 The next entrée was a little different to the others. Unlike the other, more Euro-Australian styles, the whole dish had a strong Japanese theme. It was a cured Tasmanian Ocean Trout served with mushrooms and a seaweed consommé. The trout was amazing – so soft that it melted in my mouth. I loved the use of enoki and shitake mushrooms – they added a new dimension of texture. Their chewiness highlighted by the softness of the complementing ingredients. Poured on top, the seaweed consommé with hot dashi had a slightly smokey, zesty taste. Hints of richer, fattier flavours, and fresh garden flavours were added with fried and green garnishes. The entire dish really highlighted the time and effort that must go into pairing such delicate flavours. 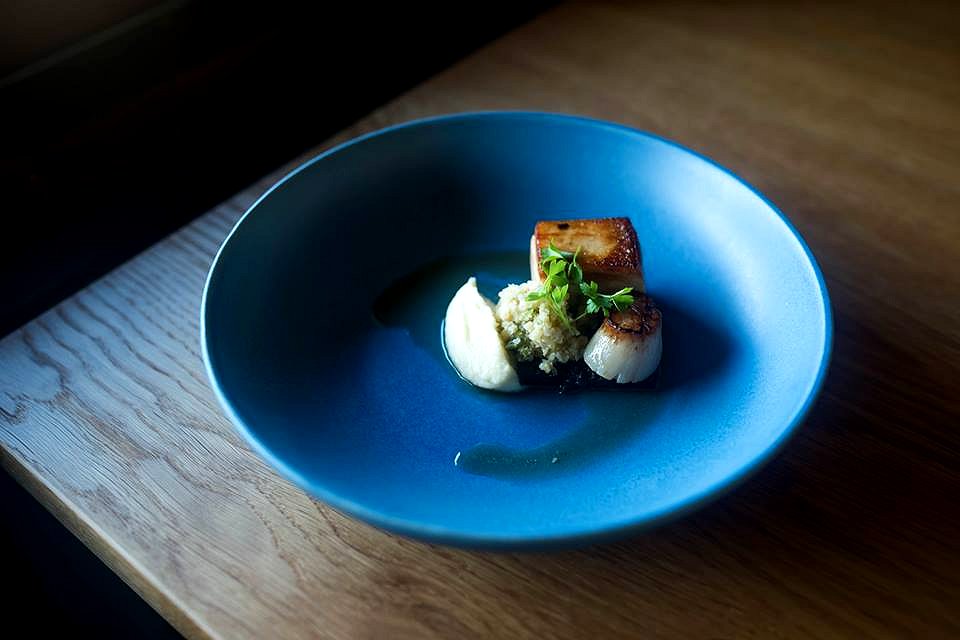 Our next dish was described on the menu as Pork Belly, Black Pudding, Scallop and Cauliflower. I am very picky with my pork, but the pork belly was fantastic – moist, flavoursome flesh with crunchy, rich skin on top. The black pudding underneath was packed with spices; notes of cloves and nutmeg bringing out an amazing aroma. To balance out the heavier flavours, the cauliflower and scallop worked excellently. The scallop was fresh and soft, retaining its shape well. The cauliflower was served in two formes; as a purée and as grits. It really showcased the versatility any food can have in the hands of the right chef. The grits and purée were like polar opposites texturally, with one smooth as can be, and the other coarse and grainy, but both carrying the same subtle starchy, sweetness of cauliflower. All three of the entrées were beautifully complemented by the wine – but the pork belly in particular matched perfectly. The tanginess and fizziness cut right through all of the rich flavours. It added a really fun, refreshing note to each dish.

After already having had so many amazing dishes, by this point I couldn’t believe we were only just about to start the mains! To complement all of our main courses we were given a red wine. It was a Top Note winery Pinot Noir – an Adelaide hills wine again. It was described to us as a classic Pinot Noir – light with bright cherry flavours. I absolutely loved this wine!

I think I smelt our first main before I even saw it. Sand Whiting served with warrigle greens, celeriac and leek. The warm, inviting aroma of the leek, and fresh, fishy whiting had me hooked before I even had a bite. The build-up did not disappoint either – the taste was amazing. The celeriac (like the cauliflower in the previous dish) was served in two different ways; as a purée and as thick cut fries. The purée had the natural celery salt taste of celeriac with underlying sweet, honey tones. The fries were angular, sprinkled with salt on their crispy exterior; I loved chomping down on them! The whiting was soft and flaked beautifully; its natural mix of sweetness and sea salt enhanced by the cosy leek taste seeping through. The warrigle greens’ freshness didn’t go unnoticed – each flavour was perfectly balanced with the last. The Pinot Noir really complemented the saltiness and subtleties of this dish – its fruitiness adding an interesting dimension.

Our other main was vegetarian. Crumbed Paris Creek Brie surrounded by pickled and sautéed carrots with a roasted carrot purée. The brie had a crunchy, golden exterior (so satisfying to bite into!). Inside, the cheese was perfectly melted, its rich and creamy flavour enhanced by its smooth, thick consistency. The carrots (barring the purée) were served whole. The pickled carrots (made with apple cider vinegar) were sweet with a spiced flavour and an almost crunchy feel. The sautéed carrots were cooked in a burnt orange butter which brought a slightly bitter tang. The sharpness of flavour in the carrots supplemented the velvety brie and spiced purée, which had a distinctly cumin flavour. Again, I felt like this dish was a testament to the chefs’ creative vision, in combining flavours and textures that surprised me in the best possible way.

Despite definitely starting to feel full, I couldn’t wait to see what desserts were coming our way! We began with a dessert wine; a 2011 Shottesbrooke Sauvignon Blanc. I usually don’t like dessert wines, as I find them too sweet, but I really enjoyed this wine. While it was quite sweet, its tart flavour balanced the sweetness well. Described to us as “dessert in a glass”, I would definitely have to agree.

I was instantly intrigued by the description of our first dessert. We were told that this dessert was interactive and involved some participation. The description it was given on the menu was Dark Chocolate, Mandarin, Tonka Bean, Honeycomb and Popping Candy. Like everything else we ate, the presentation of the dish was amazing. It consisted of half a dark chocolate sphere, nicknamed the “chocolate death star”, with smashed honeycomb, reduced mandarin gel and crushed Tonka beans scattered around it. We were told we had to break the “death star” with a spoon, by hitting it hard. Nervous, I hesitantly tried, barely leaving a dent in the chocolate. I went at it again, this time ready to really smack it! It burst open with a bang, revealing what was inside – a small panna cotta, more mandarin gel and popping candy. The combination of strong, zesty citrus in the gel, the creamy vanilla spiced panna cotta, and the sharp dark chocolate was amazing. The chocolate was crisp and crunchy, punctuated with the uniquely carbonated popping candy sitting inside. The smooth panna cotta melted into the other flavours, and the honeycomb was crunchy upon first bite, then melting into a warm buttery flavour. The creativity of this dessert was wonderful – the layered composition of textures, colours and tastes were incredible. Not only was it absolutely delicious but it was great fun!

We then moved on to a modern take of a traditionally French dessert; Baba with a twist. For those that don’t know (I didn’t before eating this dessert, so don’t worry!) baba is a yeast cake saturated in alcohol – usually rum. Our baba was made with apple cider and served with clove custard and pickled walnuts. The baba was soft, with a moist, bread-like consistency. The apple cider gave the baba a spiced, slightly tangy flavour with an underlying sweetness from the apple. The custard was, creamy and thick to the point of almost being sticky, the cloves really adding to the dishes aromatic flavours. I loved the added touch of pickled walnuts. They just added a hint of zest to the dish, which paired well with the fresh acidity of the dessert wine to cut through the richness of the baba and custard.

Finally, to finish up we had a Lime Tart (the limes fresh from their garden!) with burnt meringue, and coconut sorbet.  The tart’s crust was buttery and crumbly. The cool and citrusy lime interior of the tart had a thin caramelised layer on top similar to crème brûlée. The soft and airy meringue’s sweet vanilla taste counterbalanced the dish’s strong flavours. To top it off, the coconut sorbet was creamy and smooth, the perfect consistency to avoid becoming a heavy dish.

One thing that stood out to me during my experience at The Currant Shed was the care that went into everything. Each dish’s plating, compositions, detail, and context was deliberately chosen – in texture, aroma, flavour and visual appeal. Not only this, but the care within the restaurant’s own appearance and amazing staff service all added towards the incredible time I had. The friendly and helpful restaurant manager was so patient and accommodating (answering all of my questions, and describing each dish to us in great detail). The fresh local produce and beautiful wine, paired with the creativity and artistry of the dining experience is one that I won’t forget any time soon.